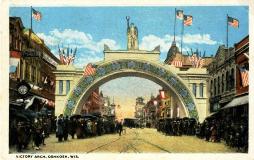 Archaic Period. Small groups of hunter-gatherers move throughout the region.

The climate begins to resemble the climate of today. The native peoples begin the farm which allows their populations to grow and become more permanent. Ceremonial and burial mounds begin being created.

1634:
Jean Nicolet, sent by the French government in Canada, journeyed the Fox  River and Lake Winnebago to locate and make treaties with native tribes.  He was probably the first European to pass through this valley.

1670:
On April 20, Father Claude Allouez said the first Catholic Mass in this area.  A marker in Menominee Park commemorates this event.

1700:
The fur trade between native tribes and French Canada was booming.

Under pressure from U.S. officals, Oshkosh in named chief of the Menominee.

1836:
First settler from the eastern U.S. was Webster Stanley.

1839:
Meeting to choose an official name for the settlement selected Oshkosh.

1841:
First school opened in a room off Stanley's cabin.  Miss Emmeline Cook was the first teacher.

1851:
First church building built by the Methodists.  Other congregations met in homes or the courthouse.

1853:
Oshkosh was incorporated as a city, population 2500.  Edward Eastman was first mayor.  Oil-burning street lamps were an early civic improvement.

1865:
First baseball team was organized, and named the Everetts, after a school principal.

1866:
Oshkosh was the second largest city in Wisconsin, behind Milwaukee.

1870:
Oshkosh had earned the nickname "Sawdust City" with a string of Sawmills lining the river producing over one million board feet of lumber per year, equivalent to 15,000 rail carloads.

1874-1875:
Fires each spring destroyed most of the north side downtown. Over 700 buildings were destroyed and rebuilt.

1900:
Public Library moved from room in city hall to new building given by Harris family and Philetus Sawyer.

1916:
Normal School burned and was rebuilt.

1919:
Victory Arch erected on Main Street dedicated to the soldiers and sailors of the Great World War.  Designed by Auler & Jensen, decorated by Brasz Brothers.

2000:
Sundial built in downtown Oshkosh.  Mercy Medical Center opened a new $50 million hospital on the west side of Oshkosh.

2005:
Leach Amphitheater opened on the riverfront.

2010:
Construction of the city's first roundabout at Jackson and Murdock, rebuilding of North Main Street as part of Riverwalk, Grand Opera House reopens after ceiling and roof repair.